I know this is an issue in many homes, which is one of the reasons I chose to write about it.  The dreaded words, “I have no clean clothes,” uttered in the eleventh hour before heading to school.

I don’t hear it too much from Bugaboo.  Buzzard and Roo take turns.  Yesterday it was Buzzards turn.

“I don’t have any clean shorts for PE,” he says to me.

I can see he’s getting worked up.  I shrug.  “I did all the laundry yesterday,” as I walk into the laundry room where there are empty machines, and relatively few dirty clothes to be seen. 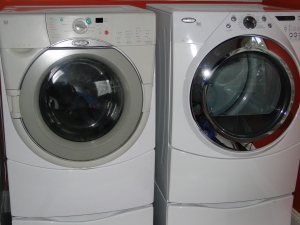 He opens his mouth to argue and I cut him off.  “I really need you to problem solve.  Borrow from your brothers if that is what you need to do.” And he does, borrowing a pair from Bugaboo.

This is a huge improvement over the past couple of years.  You see, I’m a morning person, meaning, I generally roll out of bed in a happy mood.  The surest way to ruin my day is by stepping in my oatmeal before I’ve had a chance to engage.  One of the main ways of stepping in my oatmeal is to come complaining to me about clean duds, or lack thereof.  In the past, this would result in an escalation of a scene so evil I’m sure the devil was in the corner eating popcorn while watching the show.

In the beginning, he used to say things like, “It’s been a MONTH since you’ve done laundry,” which prompted me to investigate the disappearance, only to find them in various places such as the floor of his closet (under the shoes), under his bed, the bathroom linen closet and my personal favorite, behind his opened bedroom door.

Abandoning the attempt to assign blame to infrequent washing, he moved to, “I think you must have mixed up our clothes.”  Not an unreasonable argument.  They all wear the same size, and although I sharpie their initials into all their clothes, the ink does eventually fade over time  and I give the wrong kid the wrong clothes (although I don’t know why when you get sharpie on your clothes in a place everyone can see it lasts longer than the actual garment).

With this argument, more searches were conducted, and I actually found that he had begun stuffing all his clothes into the dresser, forgetting he put them there.  Of course he couldn’t find them in his closet.  At least those were clean, albeit in the wrong place.  But the mother of all wrong places to put your clean clothes has to be back in the dirty laundry pile.  A double feature and more popcorn for the Devil.

Crisis avoided, we made it to school, and when I returned home, I found three sets of athletic shorts with shirts in a modest pile by the stairs.  I picked one up to see the name on the tag and found they belonged to Buzzard.  Hm…  In the afternoon after school, I ask him about the clothes, which I’ve left for him to take care of.

He smiled and grinned nervously.  “They were in my backpack.”

I think it’s time they did their own laundry.

This entry was posted in Family, Sons, The Face of Aspergers. Bookmark the permalink.