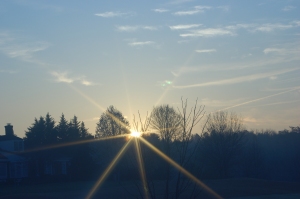 Apparently DH and I don’t know how to drive.  Here is the conversation when we drive:

Bugs:  “You made an illegal turn.  You can’t pass someone on the side to make your turn when there aren’t two lanes.”

DH:  “She was turning left and I was going straight, and the road was wide enough to accommodate the two of us.”  (Not to mention this is a country road with little traffic.)

DH:  “I did not forget my blinker, it automatically blinks three times than stops.”

Buzzard, ever the diplomat, would say, “Shouldn’t you…???” to whatever it is he thinks we are doing wrong.

Today we went to an Eagle Scout Ceremony of one of the sixteen year olds in the troop.  These always make me tear up as they begin with a slide show of when they were just little cub scouts in first grade, and then they give a short speech about all the adults they want to thank who got them there.  I always choke when they acknowledge mom and dad.  It’s good to see, but I start thinking about how it only seemed like yesterday when they were trying to figure out how to fish, and now they are driving our cars.

When we got home, they started talking about the car for some reason (I missed this part), but heard DH say, “I’d like someone to wash my car.”

DH replies, “No, like the three boys who want to drive it.”

Buzzard says, “If you pay me.”

I tell him he can share the responsibility of the six dollar car wash with the other drivers of the vehicle, or he can wash it himself.  He’s not keen on this.

I don’t get this.  When I was a new driver, I washed and waxed my mother’s car.  When I got my own car, I washed and waxed that myself too.  I don’t think this is asking a lot.  But then I apparently don’t know how to drive, either.  I said you have to meet them where they are, but I also said you have to know where to draw the line.  I think this literally is where the rubber meets the road.