When the King’s Away…

DH had business that took him to New York today, so the boys and I decided to go out to dinner.  We settled on a casual Mexican restaurant not far from our house, and I let Roo drive.

As we were waiting for the food to arrive, I was looking through my mail on my phone and came across  Limeisbetter‘s post about a group of girls swimming to the edge of Victoria Falls which I shared with the boys.  Buzzard and Roo agreed with me that it looked terrifying, Bugs thought it looked like fun.

Then the food came, and we ate (actually I ate, the boys inhaled).  It was on the way home when we turned into the neighborhood and I looked to the right to see the biggest orange setting sun I’ve ever seen.  And let’s just say, I got really excited about it.  Furthermore, let’s just say, the boys immediately began wailing about how nuts I’ve become about photography.

We were about a mile from the house, so I speeded up.  Then came the lectures from the teens in the car about speeding.  I slowed down, but that sun was sinking really fast.  I careened into the driveway, leaped out of the car as I shouted,  “Does anyone want to come with me?”

A chorus of “No’s!” rang out from behind me.

I ran in and grabbed my camera off the counter and ran back to the car only to find Bugs in the driver’s seat and Roo in the passengers seat with Buzzard standing outside the car.

“Did you change your mind?  Are you driving?”  I practically yell, then turn to Buzzard, “Are you staying?”  while I leap into the back seat.  Buzzard decides to follow.

“Do you want me to drive safe?  Or fast?”  He says, an annoyingly wise look on his face that says he is not about to be rushed.

“Good God woman!”  he declares, “You and your photos!  You are obsessed!”  (He really did say this, scouts honor!)

There is much laughing and joking the mile back up the road.  But when he gets to the end of the road to turn out of our development, I say, “Make a U-Eee here.”

Bugs says, “Oh my gosh!  You are nuts!  Over a photo?  You want me to make an illegal U-turn over a photo?”  He proceeds down the road where he can take the next road around and come back.  By the time we stop, the sun has sunk too low to really get a picture. 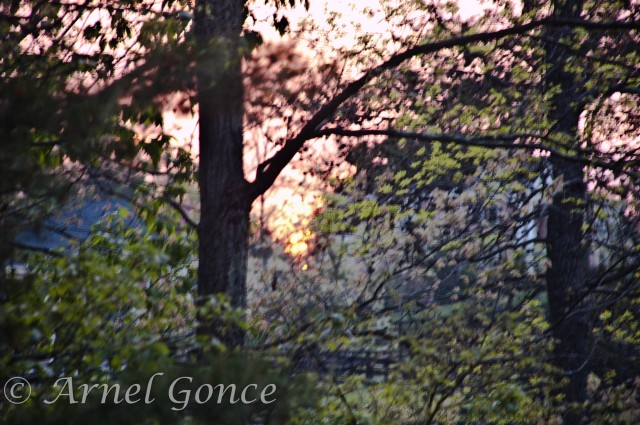 Buzzard says to me in his most serious voice, “Luckily, this happens every 24 hours or so.”  I look at him and start laughing.

We get back home, and come inside and I’m contemplating making chocolate chip cookies when I notice Buzzard staring at his phone, Roo looking over his shoulder.  He looks up at me and holds it up.  Roo is starting to laugh pretty hard, and after a few seconds he says, “He videotaped the whole thing!”

“Yeah, and mom, you were going nuts!”  Buzzard holds the phone up so I can see.  I take the phone from him, and we all watch as the scene unfolds, with me screeching like a banshee for Bugs to hurry so I don’t miss the sunset, then the moment where he misses the illegal U-turn.  They are laughing so hard they can hardly stand.  So am I.

Then one of them says something about Youtube.  Youtube?  No, way… I hit the delete button–darn those phones, you have to hit delete twice to actually delete it.  They realized what I was doing and there was a scuffle for the phone with all four of us–8 hands snatching at the phone, with all of us laughing so hard–well, I don’t know about them, but I almost peed my pants I was laughing so hard.  We all fell on the floor still scrambling for Buzzard’s phone when it went sailing out of everyones grasp and skidded across the floor like a fumbled football.  Bugs was the first to get out of the tangle and snatch it up.

He ran like nobody’s business up the stairs and to his room where he locked the door, smart kid.  The three of us ran after him, me in the lead.  When I got to his door, I knocked and said, “Let me in.”

He did, and I locked the door behind me.  Turns out, I did get it deleted.  Whew!

When we came out Buzzard said, “You deleted it?  Aw man!  That was some good video–the way you went all crazy!”

“Yes, thank you for that,” I said rather dryly.  “Maybe you should think about a career as a movie producer.”  With that, we finished our evening with chocolate chip cookies that Roo helped me make while Buzzard made another video of us cooking.  I’m thinking I should stop worrying about him.  He’s going to be O.K. 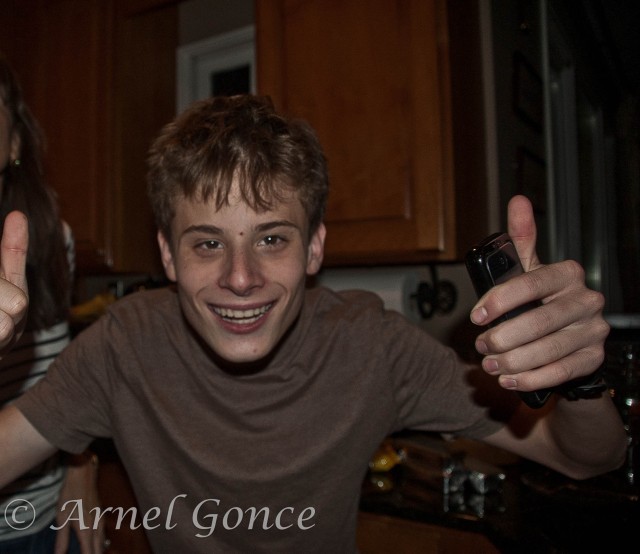 30 Responses to When the King’s Away…