I’m going to give myself a little bit of slack on this next topic, if only because I was young. Adding to my naiveté was a healthy dose of ignorance and a lack of a mirror.

The year before I graduated from college, my then boyfriend and I (now my hubby) took a  trip to Germany where we met my mother who was already in Europe at the time and did a driving tour of Germany as well as France, Lichtenstein, Austria and Switzerland.  We rented a car and drove everywhere and had a really great time.

Recently I decided to scan my photos from the Germany trip into lightroom and save them as digital copies.  It was fun going back through the trip and remembering things we had done and the different events that had happened.  Our standard operating procedure was to get up and drive about a half a day, stopping just before lunch at whatever target town we were going to stay in and find the visitors office where we would procure the name of a B&B to stay in for the night.  We would then check into the B&B and once settled would see the town.  Sometimes we would stay for a couple of days before moving on.

At one point in the trip, our plan failed us, however.  Every place we stopped at was booked, which was very odd.  At about 2 in the afternoon we stopped to get gas, and I asked the convenience store clerk if there was something going on that all the hotels were full and he confirmed that yes, there was an international computer convention going on, and hundreds of thousands of people had descended on the area.  When I reported back to my mother and boyfriend this new flash, boyfriend got very upset.  He wasn’t terribly thrilled with out method of travel, being the compulsive type that likes reservations.  He had been driving, but at this point we switched and put him in the backseat where he could fume by himself while my mother and I snickered, finding the whole thing rather funny. 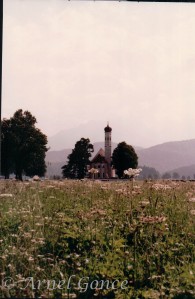 we spy the most beautiful hotel–I think it was a Hilton.  It was magnificent looking, and I suggested we stop and ask, as it was probably about 3 or 3:30 by now.  My mother thought it might be too expensive as did BF, but I thought we should stop and have a look anyway.

Now this I remember clearly, if not because of the reception I got.  Below is a picture of what I was wearing.  That’s me holding the camera.  Now, I’ll admit it’s not great, and the tennis shoes with the dress don’t do a whole lot for it (but Keds with dresses was the thing back then and I was in great company with tons of women who chose this style–well, O.K., maybe not in Europe, but still…).

So I pull up and park while my mother shakes her head, and BF grumbles.  I walk in to the most spectacular lobby, sparkling with crystal chandeliers, oriental rugs and wall mirrors.  I get about ten feet from the check in desk when the guy standing there gives me the once over, and says, “I don’t think we have anything for you.”

I was so surprised at his audacity, I laughed while I continued towards the counter.  “No really, it’s been a long day.  Humor me.”

It doesn’t sound like a lot nowadays, but this was 23 years ago, and that amount of money for a hotel room was colossal, especially when we’d been paying 15.00 per night in fabulous B&B’s with breakfast included.

I smiled back at him and said, “Your right.  You don’t have anything for me.”  And with as much dignity as I had left, I headed for the door.  But not before a slight detour in the most decadent bathroom I’ve been in to date.

So, in loading these pictures on my computer, I run across the following:

Words can’t even begin to describe how eternally grateful I am that I wasn’t wearing this on that day.  They would have met me at the door and barred my access.  Come to think of it, maybe that would have been better.

Nowadays I have more fashion sense.  That and, when I go to a store to buy clothes, I have the saleslady tell me what to wear.