Beyond The Shadow Of A Doubt

Wednesday was the beginning of a weekend that left me speechless.    It began with an irate phone call from my brother who has issues with substance abuse and violence.  Over the years I have become quite good at filtering the stuff out, but this episode set me on edge.  I was supposed to have a flight out to California at 5:15AM on Thursday, arriving at 10:30AM in LAX where I would meet my nephew and his friend.  My plan, crazy as it was was to drive them two hours to Bakersfield to pick up my dad’s truck, then have them follow me to Woodlake (another hour and a half) where I would meet a safe mover who would move the 800 pound safe from my dad’s house into the truck, and then drive three hours to Rosamond (through Mojave) to pick up the travel trailer so they could drive everything to Oklahoma City where they would sell the truck and trailer.  Ambitious?  Yes.  Stupid?  Most likely…

I forgot in all the chaos with my brother that when I set the alarm on my phone, the default for some reason is PM.  So imagine my shock when I hear my husband say to me at 5AM, “You missed your flight.”  I shot out of bed with a scream that brought all the boys running down the hall.  Not a great start to a day that was already a litany of stressful events.

I had the fastest shower I think I’ve ever taken in my life, dressed without paying any attention to what I was doing (and later had to ask someone if my lack of attention in this aspect could be detected showing through my lightweight pants–which thankfully the answer was no) and drove like a maniac to the airport, arriving at 5:38 (the airport is normally a 30 minute drive) with wet hair, no makeup and looking generally crazed and disheveled.  They were able to get me on a 6:30 flight that would get me in at 12:23.  I texted my nephew to let him know, grabbed a cup of coffee, went to my gate, sat down, and tried to fight back an attack of complete hysteria.  The woman sitting next to me stuffed a tissue in my hand and nodded a kind smile to me while I scrolled through the 21 ranting texts from my brother.

An hour and a half in Charlotte allowed me to get a grip, so to speak.  Once on the plane I struck up a conversation with the gal next to me and ended up talking the whole five hours.  I make note of this only to highlight the fact that when she asked me why I was traveling to California, we began to talk about family.  As we did so, we found we had much in common when it came to this topic.  My heart considerably lighter, I left the airport feeling much better about my journey.

It was an incredibly long day and by the time we loaded the safe it was too late to make it to Rosamond.  We regrouped and decided that we would spend the night in Bakersfield, and continue to Rosamond in the morning after I met with the attorney.  I had originally planned to meet with the realtor at 10 but now had to change it to 4:30. 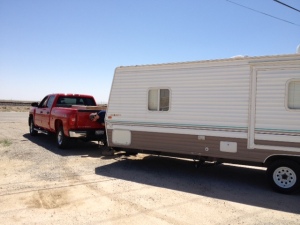 Once in Rosamond, the boys got the trailer hooked up to the truck, and I watched them drive away with the most peculiar feelings of sadness.  I got in my car and headed back to Bakersfield, crying most of the way without even knowing why.

As I drove back through Bakersfield, I stopped for a quick lunch, and then a trip to the Triple A to sort out vehicle DMV issues before driving to Woodlake to meet with the realtor.  Meeting with the realtor was very productive and I’m grateful that he was able to be so accommodating to my constantly changing schedule.  As I drove back to Bakersfield though, the gloom and exhaustion set in and I found that what I really wanted was to drive back to L.A. the next day and see if I could change my flight to a red eye Saturday night instead of waiting for my Sunday flight.  Saturday morning didn’t find me in much better spirits, but my friend talked me into a trip to L.A. just for fun. 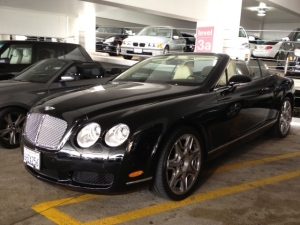 So, we headed south and spent the day in Beverly Hills observing the crazily wealthy way of life there.  A quick tour through the shoe department of Saks Fifth Avenue can always put a smile on a girl’s face no matter what’s going on!  How can anyone look at that shoe and not grin?  (Especially when they see the price!) 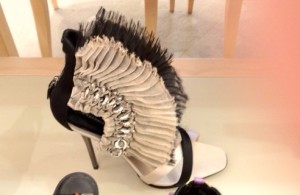 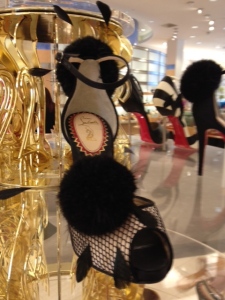 We then headed to a store called Anne Fontaine that my friend likes, where we were served champagne to celebrate her upcoming birthday (the girls there are amazing!).

After that we visited a chocolate shop.  Who could be unhappy after an afternoon of crazy shoes, champagne and chocolates?  Dinner with another friend and her husband once back in Bakersfield and I felt revived.  Sunday I drove back to L.A. where I once again was seated next to, and had the most amazing conversation with another gal who echoed family sentiments back to me.

Really, what are the odds that on both flights I get seated next to someone who could identify with me?  Or that I could identify with them?  I feel like God handpicked my seat mates, knowing how I was feeling and what I was going through.  Or maybe what they had been going through.  Bruce, you were right.  I missed that flight for a reason.  My friend talked me into staying for a reason.  Even though the trip was in some ways the most stressful one yet, I not only had the amazing support of my existing friends, both readers, internet and blog friends as well as personal friends, but God added to that number two more amazing women from my flights.  Thank you to all of you for your support.  Every one of you is a gift from God.  I know this, beyond the shadow of a doubt.  And I am learning that sometimes if I wonder where He is, then I am not looking hard enough, because He is always there.

21 Responses to Beyond The Shadow Of A Doubt