My Husband is Just a Young Grasshopper…

Thursday past we decided the last minute to go to the Outer Banks of North Carolina for the weekend, which is why I haven’t posted anything since Friday.  It was an interesting weekend to say the least.  Before we even got in the car to leave, Roo decided to pull out the pogo stick in the garage and have a go on it in the way that boys sometimes do when they should be getting in the car.  Needless to say, the phone in his pocket didn’t stay there, and it’s trip through space in a perfect parabola created enough gravity to shatter the glass.  The look on his face…well, you can imagine.  We stopped at an Apple store on the way down, and made an appointment for its repair on our return trip yesterday when we had more time.

The drive down was full of stress–for me anyway because Bugs wanted to drive.  I was a nervous wreck.  He became quite annoyed with me offering advice (not that he would describe it this way–his description I believe would include the word screeching) about distance between cars.  By the time we arrived, I was sweating profusely and in desperate need of a glass of wine.

A friend of mine was staying in Kill Devil Hills, and had taken four teenagers for the week.  She wanted company, and this was the impetus for me going.  Hubby was in Virginia Beach on Friday, so he joined us that evening.  Originally we had intended on staying with my friend, which we did on Thursday, but there really wasn’t room for even one more person, and they were leaving on Saturday whereas we were leaving on Sunday.  Do you know how idiotic it is to try to find a hotel room the day before arriving at the beach for the first weekend after school is out? 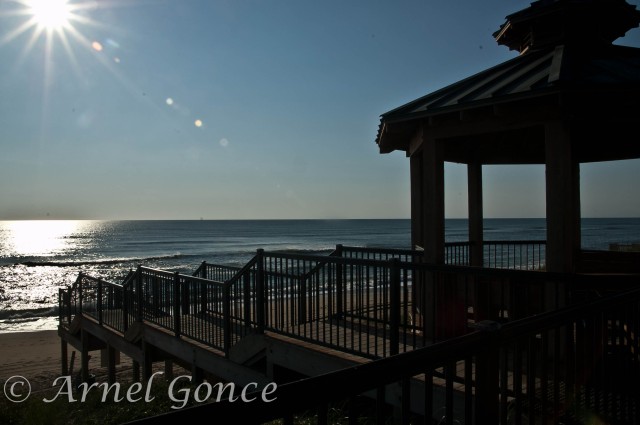 I did manage to find a room that would accommodate the five of us at the Days Inn on the beach, with breakfast included.  Of course when you are desperate, nothing comes cheap, but it did include breakfast, and for three teenage boys I’m betting that alone was worth about 60.00, given that they can eat the equivalent of their own weight in sausage.

Now the really interesting thing about this adventure with my friend was that there were six boys and one girl once we arrived.  Let me rephrase that.  One blond-haired, blue-eyed, ballet dancing, rising 9th grade girl, and six teenage boys.  I’ve never seen so much flirtation and muscle flexing going on, and the only brothers in the mix were my three boys.  The adults really didn’t need any other entertainment.  This was especially amusing when it came to going out to eat and deciding who was going to sit where–or rather who was going to sit next to whom.  Add in that one of these boys was already the boyfriend of said teenage girl, well…

Five of the seven…

The kids had a great time playing on the beach, and miniature golf in the evening.  They left on Saturday, which left my boys feeling a bit deflated, but passed the day amiably enough.  Saturday evening at dinner we were sitting in the restaurant laughing and talking and generally having a good time, when all of a sudden my husband who is sitting beside me makes a sudden lurching movement and cups his hands together, and then shakes them violently in the air as though he is getting ready to unleash a pair of di that are going to win him a million dollars.  He then gets up out of his chair and walks to the glass door behind us and throws this imaginary dice as hard as he can at the door.  I tell you truly, the four of us stopped talking immediately at this odd behavior, and stared with our mouths slightly agape.  When he turned around to face us, he said, “What?” and smiled a sly, charming smile.  Then he said, “Do you think that fly is going to come back to our table again?”

He sat down next to me and smiled even bigger.  I started to giggle.  “You are so very clever, young grasshopper,” I said.  Roo and DH were the only ones who got the reference.  After dinner we went for a short drive, and I was able to capture these sunset photos. 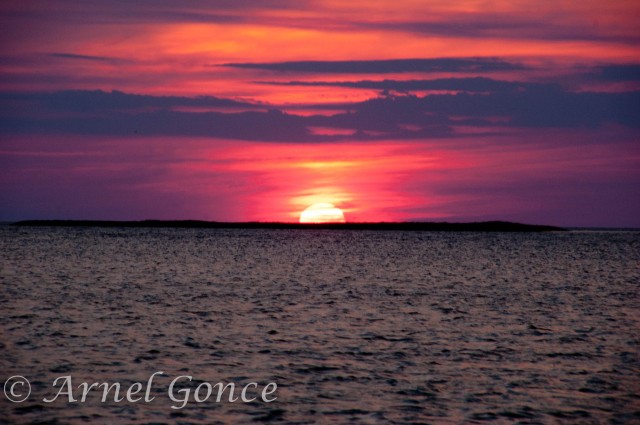 All in all, a lovely weekend.

33 Responses to My Husband is Just a Young Grasshopper…