Last week my beloved blender died.  Actually, I don’t do the events justice.  I’ve mentioned before that about a year ago I tried Shakeology from Beach Body, and found that it was a great product and have used it a little off, but mostly on in the past year.  I had a very nice cuisinart blender that I used to blend this drink (because, anything containing wheat grass needs tweaking with other, shall we say more palatable foods).  However last week during the blending cycle, a large cloud of dark smoke with an ominous smell rolled gracefully from the motor of my blender.  It stunk the kitchen up for several hours.

What’s a girl to do?  Look around for another blender.  Since we use the blender quite frequently (have I mentioned how much I like margaritas?), and usually require it to pulverize ice for extended periods of time, I whipped out my computer and visited the Williams Sonoma catalogue for a little education on blenders.  That and right before my dad died last year he had given me a Williams Sonoma gift card for my birthday that I’ve had on my desk for the better part of eight months, not having been able to bring myself to spend it.

I looked at several different blenders before the Vitamix thing caught my eye.  Now, I have heard of Vitamix, but wasn’t really familiar with their products.  Had actually never even given them a first glance, let alone a second.  But Williams Sonoma, in their clever marketing, has video demonstration of some of the lines of electric appliances and their performance.  So I thought I’d have a little looksee just out of curiosity.

Turns out it is quite the machine.  Turns out it also has quite the price tag with it.  Also turns out, it’s probably justified.  In the 1920’s W.G. Barnard was a salesman of home appliances.  In 1937 he introduced a blender to his line.  In 1949 when television rolled around, his son Bill, seeing the importance of this particular advertising medium seized his opportunity and as a result was responsible for making the blender a household item.

But it wasn’t until 1955 when Bill and his wife Ruth took over the company that the blender became more than just a blender.  He believed that with excellent customer service and a great product, you couldn’t go wrong.  In 1969 it became a kitchen tool that could heat foods such as soup with friction, and liquify whole fruits and vegetables, and pulverize ice into ice cream, effectively making it the product it is today.  Soon restaurants and top chefs began using the tool in their kitchens as time savers.

So I sat there pondering this little tool for a couple of days.  I watched all the videos to see everything each model could do.  I then turned my credit card points into Williams 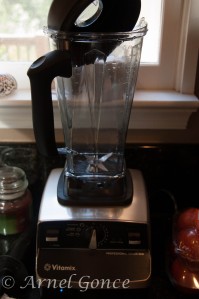 Sonoma gift cards, and armed with these and my birthday gift card, I went to see the thing in person.  I then came home with one wondering if I just made the biggest blunder ever.

Well, I’ve only made a few things, but I don’t believe I did make a mistake.  Smoothies are so, so easy.  I had a bag of frozen strawberries that the other blender just wouldn’t chop up.  Didn’t seem to be a problem for this thing.  I made peanut butter from nothing other than peanuts–took about 40 seconds and it came out warm, gooey and delicious.   I attempted frozen orange sorbet, but I think I didn’t put enough ice in so it was runny.  I want to repeat that one.  One of the best things about it is clean up.  There is no removal of the blade assembly.  You just blend warm soapy water on the smoothie cycle, and it’s clean.  It’s way easier than a food processor.  Now the boys have been watching me test all this stuff, and became really curious about it.  Today they asked what I was going to make in it.  I said, “Tomato soup.”  This was met with suspicion.

I put a pan in the oven containing olive oil and salt,  six halved tomatoes, a quartered onion, and three cloves of garlic.  I roasted the mixture (I could have stuck them straight in the blender, but one online person said tomato soup is better if the fruit is roasted) until they wilted, then threw everything in the blender, hit the hot soup selection and let it blend for 5 minutes. 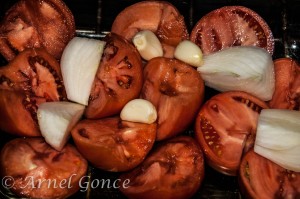 I then added basil and blended for about 15 seconds, then poured it into two bowls and served Bugs and Roo.  Buzzard hung back, as he has NEVER liked soup of any kind. 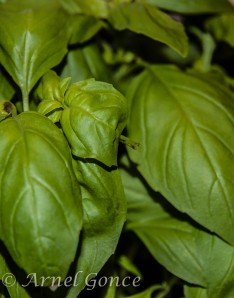 Bugs got him to try it on a cracker, and he said, “Is there any left?”

I gave him the remaining bit, about a half a bowl.  They ate it all, and when they were done said, “When are you doing potato soup?”

I have no idea why the tomato soup is yellow.

29 Responses to The Vitamix Hype