Posted on September 28, 2010 by allthingsboys

Meals around here resemble feeding time at the zoo.  It’s gotten better over the years, but we still have our moments.  When they were little and all lined up in their high chairs, I felt like it was an event to be gotten over as quickly as possible.  Bugaboo was pretty typical as a toddler when it came food.  Buzzard, as I have already established was a chronic vomiter.  Roo, however liked to play in his food.

Maybe it was sensory.  Children on the spectrum often have sensory issues.  He was continually running food through his hair and hands.

It’s only natural that dining out would come up sooner or later.  We were brave when we took them out as toddlers, generally employing a sitter to come along for the fun.  We took turns sitting next to Buzzard, on the lookout for the signs that a bag should be held under his chin.  Eventually (like, after about four years, which coincided with his learning to eat solid food) the upchuking stopped, and we only had to deal with manners and behavior.

Over the years, they were pretty good.  Manners such as putting the napkin in your lap, and looking at the waitress/waiter when you ordered came more easily than behavior such as, you don’t kick the person across from you under the table, no matter how much fun it is to torture them, you don’t have a meltdown tantrum because you wanted to sit by the window and your brother got there first and you don’t take food off your brother’s plate when they aren’t looking.  Amazingly, nose blowing at the table didn’t come into it until a couple of years ago.

It was during spring break we decided to spend five days in Washington D.C., seeing as much as we possibly could.  I decided the time was ripe for a really nice Easter brunch at one of the really nice hotels there.  I bought the boys sport coats, slacks and ties. 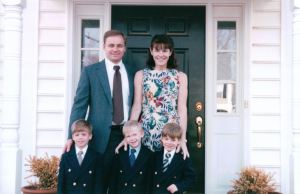 We went to The Basilica of the National Shrine of the Immaculate Conception, the largest cathedral in North America and sat through a beautiful Easter service.  Then we made our way to the designated restaurant at the designated hotel (I think I’ve intentionally blocked the name out because I can’t show my face in there again–EVER.

The tables were beautiful with linen napkins and tableclothes.  The Easter feast was magnificent.  They had every dish conceivable covering both breakfast and lunch.  The boys did admirably carrying their plates and politely asking for food, or collecting it themselves.    They asked questions when they didn’t know something, such as should they get a clean plate when they went back seconds, and what did they do with the dirty ones. My heart was overwhelmed at how well they did.

Yes, the three of them did wonderfully well.  It was as I was finishing my own plate when I hear the loudest, most disgusting nose blow on record.  Did I mention they had LINEN napkins?  I look up from my plate and see the three little cherubic faces frozen with a look that reminded me of a deer in the headlights, and was surprised to see that the sound had not come from one of them.  I followed their stare which led straight to dad, who had a napkin pressed to his nose.  No one said anything for what seemed the longest time.  Then Roo began to snicker.  The snicker set off my own giggles.  I motioned for him to get up, and with as much dignity as I could muster I followed him out into the hotel entrance where we both laughed so hard we couldn’t breath.

You can dress them up, but you just can’t take them out.

This entry was posted in Uncategorized. Bookmark the permalink.